How To Use Excel SUM Function

its an expedient way to add the values within a column or row or even non-adjacent cells. SUM is found within the Functions Tab under Math & Trig, scroll down the menu and select SUM. AutoSum is also located as its own button in the Functions Tab (highlighted).

The third location for the SUM Function is in the Home Tab in the editing box. The fact that Excel has the SUM function in so many locations gives a hint as to how often this function is used. 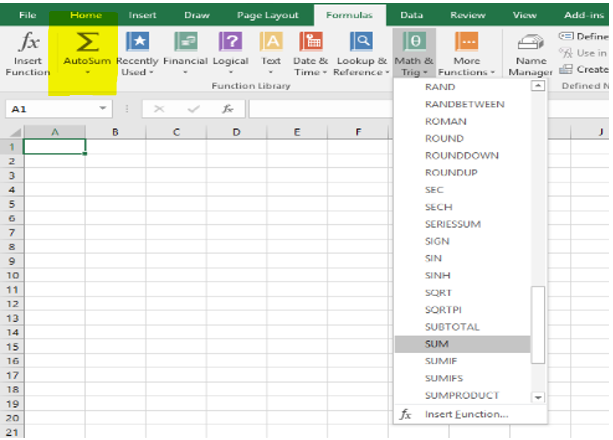 Looking at the above, it show the four ways to easily use the SUM Function at the end of each row to total each expense

How To Use Excel SUM Function Non-Adjacent Cells

To add all Travel Expenses (Food, Gas, and Hotels) enter =SUM(B2,B4,B6) as the Cells are not next to each other and cannot be selected by using the Range method. 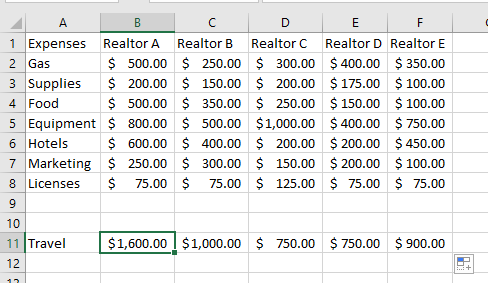 How To Use Excel SUM Function Using mathematical equations

Adding to the end or the beginning of the SUM Function you can create mathematical equations. The SUM Function can be added, subtracted, multiplied and divided by any other numbers. Examples of each are listed in Column H with the Results shown in Column G below.

Using the SUM with other Functions

Nesting in an IF Function Example: The boss is offering a reimbursement if the total expenses are greater than $2000 for the year.

3. Copy across all columns to apply to each Realtor.

SUM and another function Example:

How To Use Excel SUM Function ? To find the total average expenses for budgeting, each row could be averaged and then calculate the total of those averages or all can be entered into one Function as follows:

Nesting the AVERAGE Function within the SUM Function will return the same value without having to add a Column into our worksheet.